If remembering the past helps to ensure we don’t repeat its mistakes, it’s also true that we need to understand the history of a place in order to play a role in shaping its future. For three generations of women here in Kennett Square—former Borough Councilmember LaToya Myers and her mother, Theresa Bass, and grandmother, Ophelia Bass—working to improve our community in the light of Kennett Square’s history  has meant daily vigilance and a continual recommitment to the high calling of living in community. Their goal was always to build a stronger, more just future where everyone has the opportunity to flourish.

In 2020, for the first time in ten years, the National Night Out (NNO) event couldn’t take place on East Linden Street on the first Tuesday of August because of the COVID-19 pandemic.

This event, which has been reimagined and revitalized in Kennett Square over the past decade as a “Community Policing Celebration”—think officers and kids laughing together, food and games, and wide-eyed little ones exploring fire trucks—took place once again as part of the Third Thursday on State Street in October 2022.

But in honor of the cancelled event in 2020, LaToya and Theresa shared the inspiring story of a neighborhood, and a town, transformed.

Theresa passed away suddenly this week, leaving her family and our community in mourning for her loss. We share this story again here in honor of Theresa, in celebration of her life and legacy, and with our deepest condolences to her family. 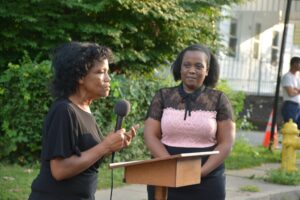 Theresa Bass and LaToya Myers at the National Night Out on East Linden Street in August 2019.

An Open-Air Drug Market Closes, and an After-School Program Opens

When LaToya was a child, she waited for the bus in front of Sam’s Sub Shop. But she wasn’t allowed to walk the short block to or from her home on East Linden Street on her own because it was too dangerous. After graduate school, LaToya moved back to her childhood home, and today her teenage daughter and her friends can walk to Sam’s, La Michoacana, and other places without fear. The transformation began with LaToya’s grandmother, Ophelia Bass.

“My grandmother had seven children and raised them with an iron will at a time when being Black meant you were a second-class citizen,” LaToya said. Her grandmother’s concern for kids extended throughout the neighborhood, and she was determined to find a way to feed hungry kids. Through a connection with the Archdiocese of Philadelphia, Ophelia spearheaded efforts to pass out meals to kids during the summer months.

As often happens, meeting this basic need led to opportunities to meet other needs. When Ophelia learned that the meal program could only continue through the school year in the context of an educational program, she extended Study Buddies, an after-school program that her daughter, Theresa, ran at the Bethel AME Church on East Linden Street.

“Education is so important,” Theresa said. Her passion for the work that her mother began in their neighborhood brought her into contact over the years with many people across Pennsylvania who were engaged in similar work rebuilding neighborhoods, including Governor Ed Rendell.

In 2003, when Rendell signed a bill to fund the Elm Street Program, which provided grants to improve authentic residential neighborhoods near downtown business districts, what was initially called the “Historic East Linden Street Project” was born. Around the same time, Historic Kennett Square (now Kennett Collaborative) began as a Main Street Program. Rendell was a champion of the Elm Street program in particular because he knew that change needed to happen in residential areas before it could happen on Main Streets.

Kennett Square is a case in point. The work of Ophelia, Theresa, and others on and around East Linden Street has paved the way for State Street, and now other parts of town as well, to prosper. “We worked to dislodge street dealing, and that’s a big part of State Street being a vibrant destination,” said LaToya. “The open-air drug market that once flourished in our neighborhood has closed, and we turn back every effort to start it up again.”

A focus on the kids and a strong but nonjudgmental stance have been key to this success. “We don’t know the traumas someone else has been through. We don’t say, ‘You’re a terrible human being for doing this,’ but instead, ‘Hey, the kids are out—do you really want them to see this?’” LaToya said. When things are going well, people tend to forget what it was like before, but keeping the neighborhood safe requires constant vigilance and ongoing communication and relationship-building between residents and police officers. 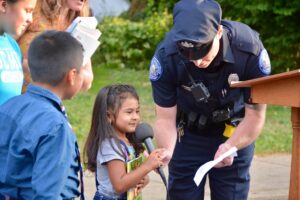 Over the years, the National Night Out has been emblematic of ongoing community work and relationship building.

A group of residents who weren’t entirely comfortable with the implications of the word “project” in “Historic East Linden Street Project” formed the nonprofit Joseph and Sarah Carter Community Development Corporation (CDC)—named in honor of the first African American homeowners on East Linden Street—to continue the work of ensuring that their neighborhood is safe and offers support and opportunities for future generations.

Welcoming new immigrants and fostering good intercultural community relations are also part of the Carter CDC’s ongoing work. This welcoming stance is rooted in history, too, as the original Quaker residents of East Linden Street offered safe places for Underground Railroad passengers and also welcomed Black residents to the neighborhood. When Study Buddies was featured on an NPR program several years ago, LaToya said, one student, a native Spanish speaker, shared how the after-school program was the first place she felt comfortable speaking English.

“My mother continued her mother’s work of building community, and it’s impossible not to be inspired by her example,” said LaToya. “Her new thinking, careful planning, and thousands and thousands of kind acts, along with those of the many people who have worked with her over the years, have paid off spectacularly.”

A celebration of community policing took place once again as part of the Third Thursday on State Street in October 2022.

National Night Out: A Celebration of Community Policing

Ten years ago, Chief of Police Ed Zunino, knowing that Theresa was working to find positive solutions for the neighborhood, brought the National Night Out (NNO) program to her attention. “We might be the first one in Chester County,” he told Theresa.

“Yes, that’s a good idea,” she said, and she brought it to the Carter CDC Board. Her daughter wasn’t so easily convinced. LaToya had just moved back to Kennett Square, and as a mother with a young child and a full-time job who also worked with her mother on other Carter CDC initiatives, including Study Buddies, the last thing she wanted was another event. The family tradition of working together was so strong that she knew if her mother took it on, she’d be involved. Theresa prevailed, and LaToya is glad she did. “I was wrong,” she said with a smile.

The Kennett Square NNO is not a typical “take-back-the-street” event. “We call it a Community Policing Celebration,” LaToya said, “because it’s much more than a one-day thing. It’s about making connections, building relationships, and shaping a culture. All of that has a tremendous impact, but it takes years.”

Because the population that the Carter CDC serves is heavily policed, they want to be sure that children have early and positive interactions with police officers—and vice versa. Getting to know the kids benefits officers as well. “We need both parties to change their behaviors,” LaToya said. Officers on the Kennett Square force have attended Study Buddies on a regular basis over the years and engaged in activities with the kids like trading baseball cards and making zines.

Like countless others, Theresa and LaToya experienced the grief and pain of police brutality first-hand. “My first cousin was a victim of police violence, shot in the back by police officers and killed in Chester,” LaToya said. But they’ve also witnessed the positive power of community policing. “When my mom’s brother, Uncle Avery, was struggling with a substance use disorder, Ed Zunino was still a street cop. Ed showed him compassion, care, and support—tough love,” said LaToya. “After my uncle was clean and Ed’s son, Ed Jr., was battling a substance use disorder, Uncle Avery became his sponsor. My uncle was 27 years clean when he died from cancer in 2012, and he was always a dedicated advocate for people. Even after Ed Sr.’s death, his widow Lois and Ed Jr. attended NNO each year. All of this attests to how together we’ve shaped the culture of policing in this town.”

LaToya brought all she learned—from her strong family role models and her deep knowledge of the community and how it’s changed, as well as her education and experience as a public health professional, including a few years working with women in a correctional facility—to her role as Borough Councilmember. After Ed Zunino retired, LaToya was on Council and able to be part of the process of hiring his successor. She asked candidates nuanced questions about how both Black Lives Matter and Blue Lives Matter shaped the way they police. It’s important to remember, she said, that taking a stand against police brutality is very different from being “anti-police.”

The night before the protest here in Kennett Square in June 2020, Chief Holdsworth and LaToya posted a video urging citizens to demonstrate peacefully. “I could only make that video with him because I know him,” LaToya said. “We work on it every single day. We acknowledge and combat the biases that sometimes surface unconsciously.”

It’s a holistic approach, building an understanding of the different components and moving them forward incrementally—community policing, food insecurity, education, and acknowledging the often painful history. But that’s what comes of being invested and rooted in a community. LaToya learned from both her grandmother and her mother that volunteering is not a chore but a lifestyle. “When we stop providing charity and start living in community,” LaToya said, “we’ll increasingly be engaged with each other and recognize that when one person thrives, it benefits the whole community.” 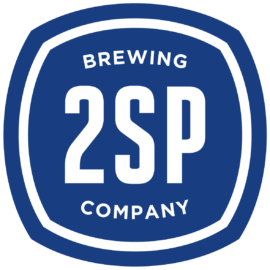 The Beauty of Being United

When Terry Vodery took over as CEO of United Way of Southern Chester County last summer, she couldn’t have imagined how much...

Help Build the Community You Want to See

The How We Build Matters Speaker Series event on September 22nd will equip community members to take action towards building a more...