There’s nothing Tara Dugan loves more than the challenge of reimagining a dilapidated old building for adaptive reuse—although seeing what the passionate and talented worKS Kennett Square vendors come up with might be a close second. “It’s their story,” Tara says as she surveys the transformed garage that holds the collective creativity of over two dozen local artisans and purveyors.

The worKS story begins with an idea—to bring a dynamic community of people with unique brands together under one roof—and a search for that roof. Tara was looking for a ground-floor space with roll-up doors, and although she’d been eyeing the old garage at the corner of Birch and Walnut for awhile, she’d dismissed it because it was so close to the railroad tracks. Then she thought again. “I realized it was kind of cool, and I could play off that.” When she arrived home one night in 2016 and told her husband she’d just bought the old Benge garage, he was incredulous. “I told him, ‘It’s probably going to be OK,’” she says.

And, eventually, it was far more than OK. Halfway through the extensive renovations of the 1950s-era building, her builder, Nick Basilio, discovered that his grandfather had built the garage. “And his company, Mobac, was bringing it back to life,” Tara says. “I love that Kennett is full of these kinds of connections, as well as this energy for recycling and reusing existing resources.” 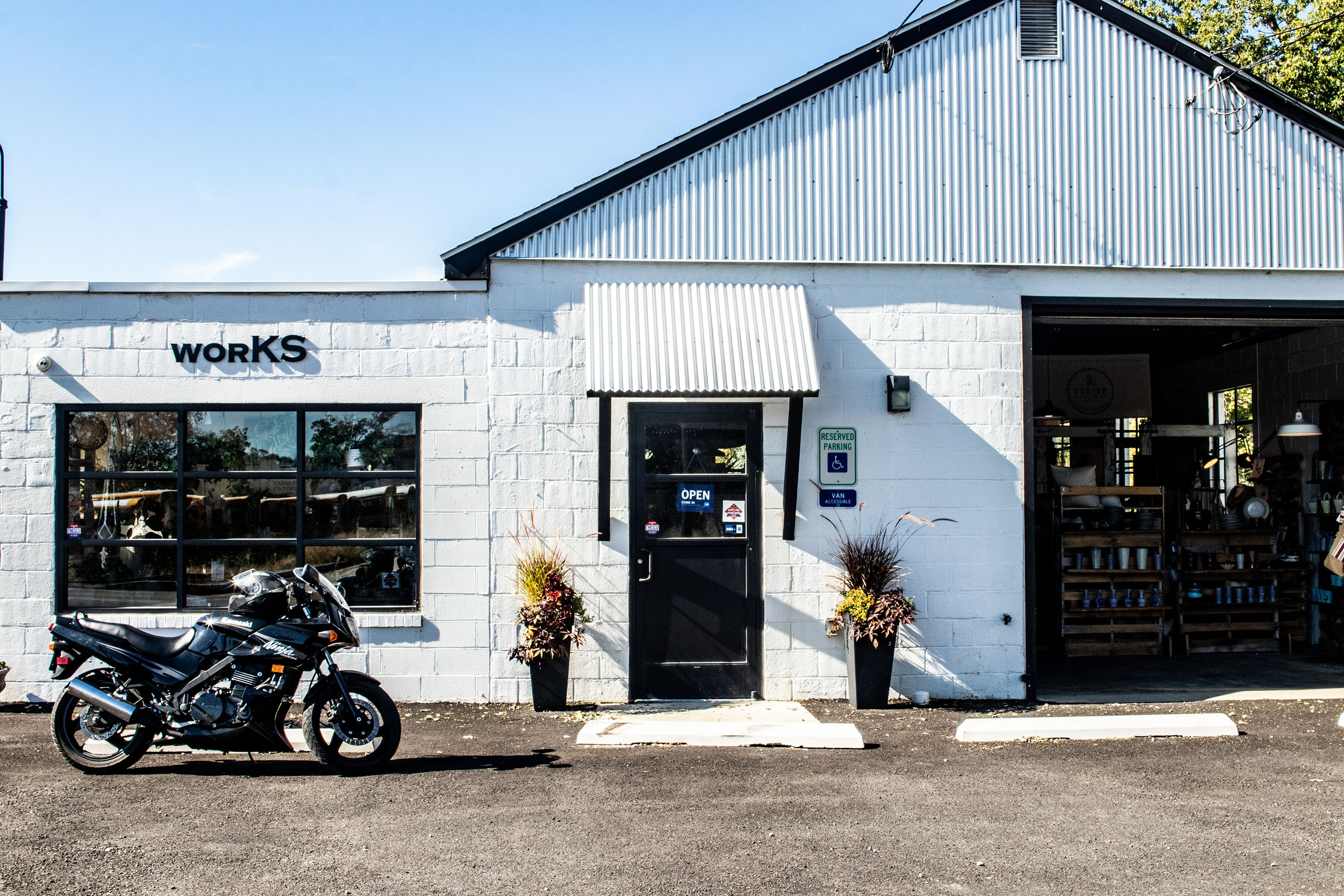 worKS Kennett Square, a transformed garage, is another great example
of adaptive reuse in the Birch Street neighborhood.

Reimagined: A Career, a Building,
a Community of Artisans

A New Jersey native, Tara went to college and law school in Pennsylvania and met her husband when she moved to Philadelphia. “When it came time for our family to throw down some roots, we came here to Kennett,” she says. “We’ve been here over 17 years now and it feels like home—although to locals I might still seem like a carpetbagger, I do know enough to call it uptown,” she says with a laugh.

When she decided to step away from practicing law so she could spend more time with her young children and disabled parents, the idea for Scout and Annie, a vintage homegoods business, was born. “I was lucky to have something else I love to do,” she says. She started by doing shows like the Clover Market and Brooklyn Flea and enjoyed it so much that she opened a brick-and-mortar storefront on East State Street in 2011. As her business grew, she met more and more great dealers and makers who were incredibly talented but who had to spend so much time and energy on the business side of building their brands that they had little left to devote to doing what they loved to do. And so the concept for worKS began to take shape. 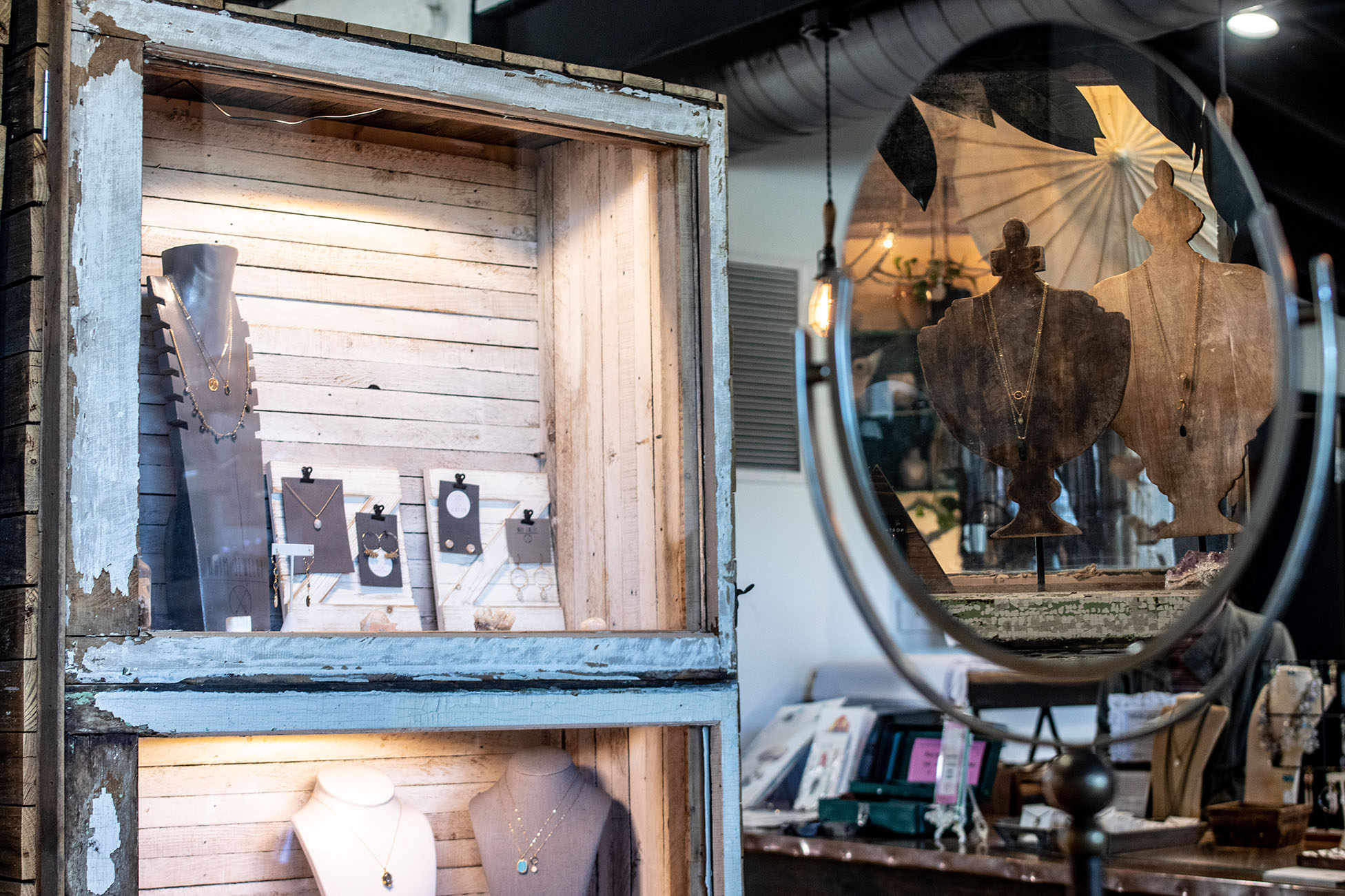 This idea, to provide a space and a business model that would free makers to create more and grow their own brands, has evolved and taken on a life of its own since worKS opened three years ago. Tara takes an almost maternal pride in the fact that several worKS vendors have opened their own businesses. While this kind of entrepreneurial altruism might seem counterintuitive, she’s seen how innovative, organic growth benefits everyone—customers as well as other businesses. It’s evident in microcosm in the vendor spaces at worKS, where there are lots of one type of thing. “People spend time in each space looking, touching, laughing,” Tara says. “By design, we started with one jeweler, and now we have four different jewelers, as well as vintage jewelry. People love fun, affordable, well-crafted jewelry. These different vendors don’t compete with each other—they enhance one another.”

The kitchen shop, the newest addition to worKS, is another example of grouping makers by category. “We saw how people were responding to consumable items like flowers from the Farm at Oxford, syrup from Whiskey Hollow, and Zoet Bathlatier candles,” she says. “People were putting us on their shopping lists. We built on that so now they can find much more here each week.” The worKS kitchen shop features local honey, delicious peanut butters, teas, and fantastic hot sauce, as well as utensils, bees wax wraps, and more. It’s a simple but effective approach to the retail experience. The more product there is, the more vendors there are, the more shops and restaurants that open in a community—the better for everyone.

These different vendors don’t compete with each other—they enhance one another. 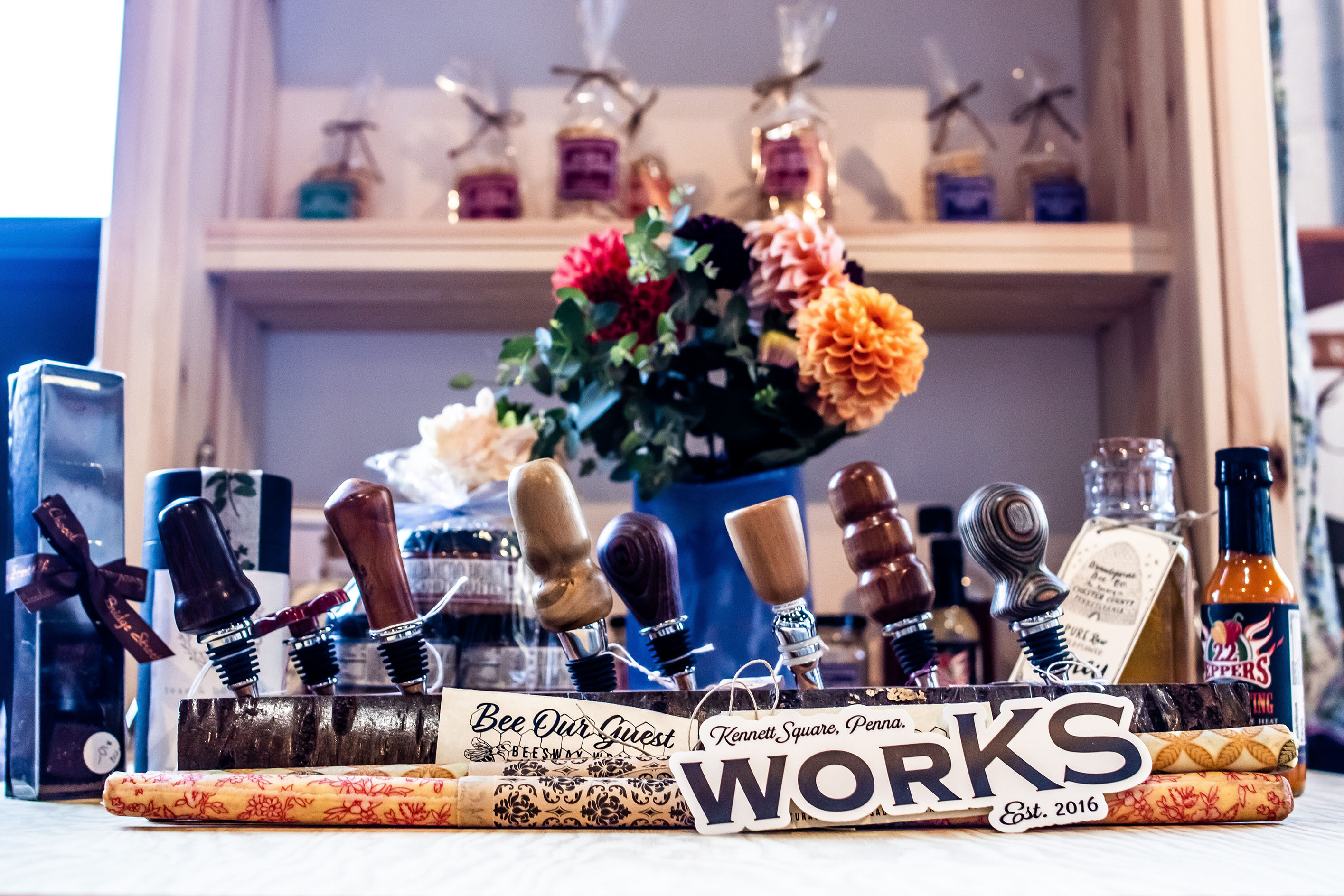 “Everything at worKS is by design,” Tara says, including the location and the weekend-only hours. “Like the Brooklyn Flea and the Holiday Village Market, it’s a hybrid of an event with a brick-and-mortar shop. It’s about funneling shoppers onto the weekend to explore, to come to something with multiple vendors that feels like an event.” To build on that concept, worKS holds all sorts of special events—from artist receptions to diverse worKShops and charity events—which customers love and which add to this community dynamic she’s cultivating. “These are experiences you can’t find on Amazon,” she says. “You can’t taste local honey or try on vintage clothing online or meet the artist who made the earrings you’re admiring.” Customers will also always find something different at worKS because vendors come in during the week to refresh and restock their spaces. “So worKS is literally new and different every weekend,” Tara says.

Tara’s own brand, Scout and Annie, has shifted in focus as worKS has taken off. She has very few pieces at worKS now and sells almost exclusively to interior designers and decorators. As a small business owner, she’s on 24/7, and she takes her responsibility to her worKS vendors very seriously. “worKS supports 25 families, and that’s mission critical,” she says. “For the majority of them, this is a full-time occupation. These aren’t hobbyists or amateurs. They’re at the top of their game and this is their livelihood.” She pauses and smiles. “That’s why I don’t sleep at night.” But it helps that she has the right team in place and her multi-talented shop director, Liz Law, helps to keep everything at worKS running smoothly.

When Chris Allison of Fresh Vintage pops in to restock his time machine of a shop within the shop, Tara is delighted for the opportunity to shine a light on one of the families worKS supports. Chris and his wife Colleen both possess the amazing ability to mine vintage treasures from the mountains of stuff they sift through every day. “We’re out there a lot, at auctions and flea markets,” Chris says, “and people call us when they have things, too. We look for items that are local, from Chester County—all sorts of screwball, hard-to-find maps, photos, signs, books, and related items.” Their tagline is “always buying and selling cool old stuff.”

Although Colleen started the business 20 years ago and was the one who got Chris into it, at first part-time and then full-time when he was laid off ten years ago, his parents had been antique dealers, specializing in primitives. “I grew up going to auctions and stuff and I hated it,” he says with a grin. “But maybe something rubbed off.” Tara laughs. “It’s cool that you developed your own voice within that tradition,” she says. His taste has evolved over the years, Chris says, and it’s become tougher to source things. 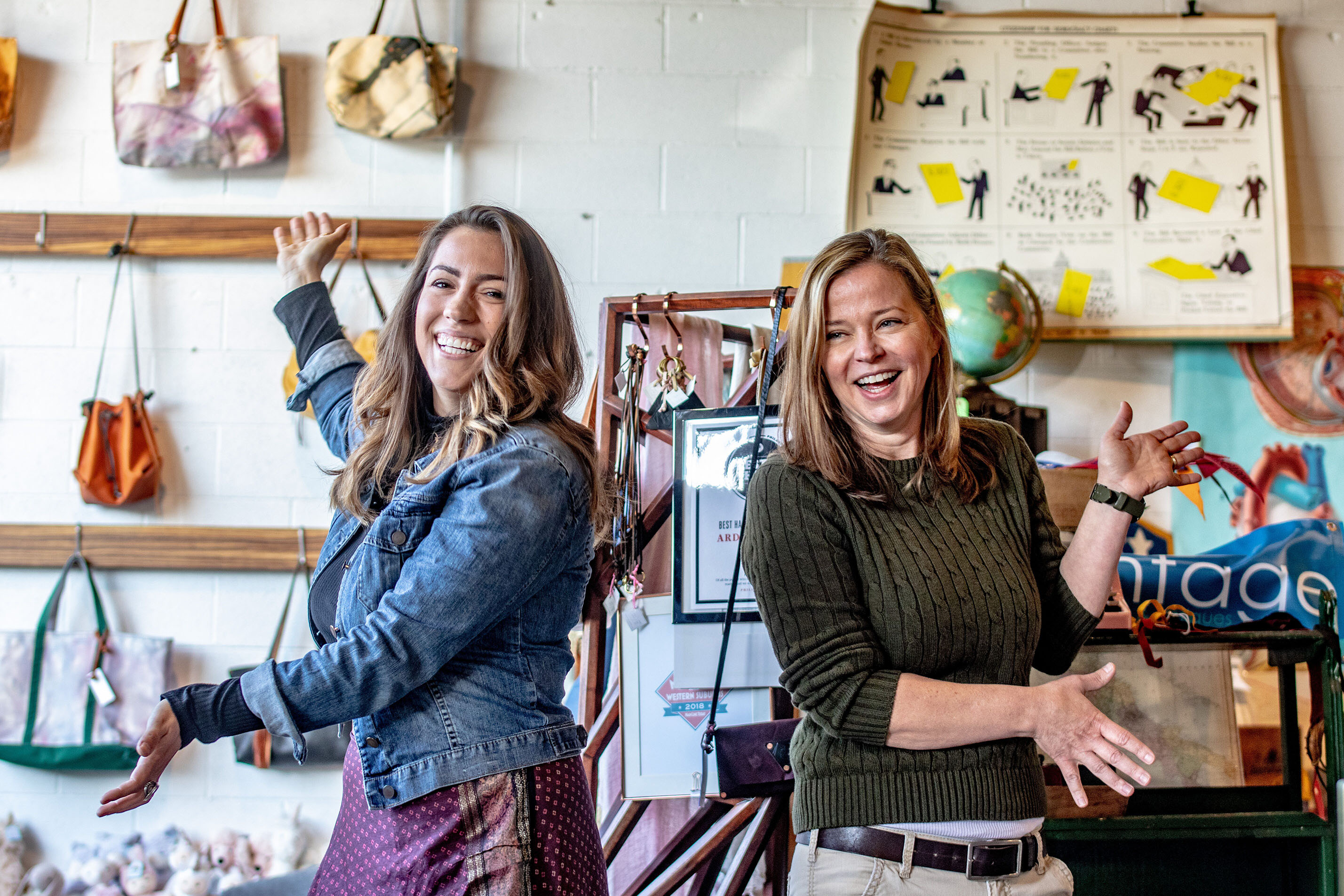 “Chris and Colleen have made a name for themselves in the ephemera world. They can find anything,” Tara says. When she wanted to give her husband a Philadelphia map with the church where they were married, she wasn’t sure such a map existed. But the Allisons found one. Customers can find Fresh Vintage on Etsy and at a variety of Philadelphia markets including the Clover Market (coming to Kennett Square on November 3rd) and at the Holiday Village Market at the Creamery on the first weekend of December. 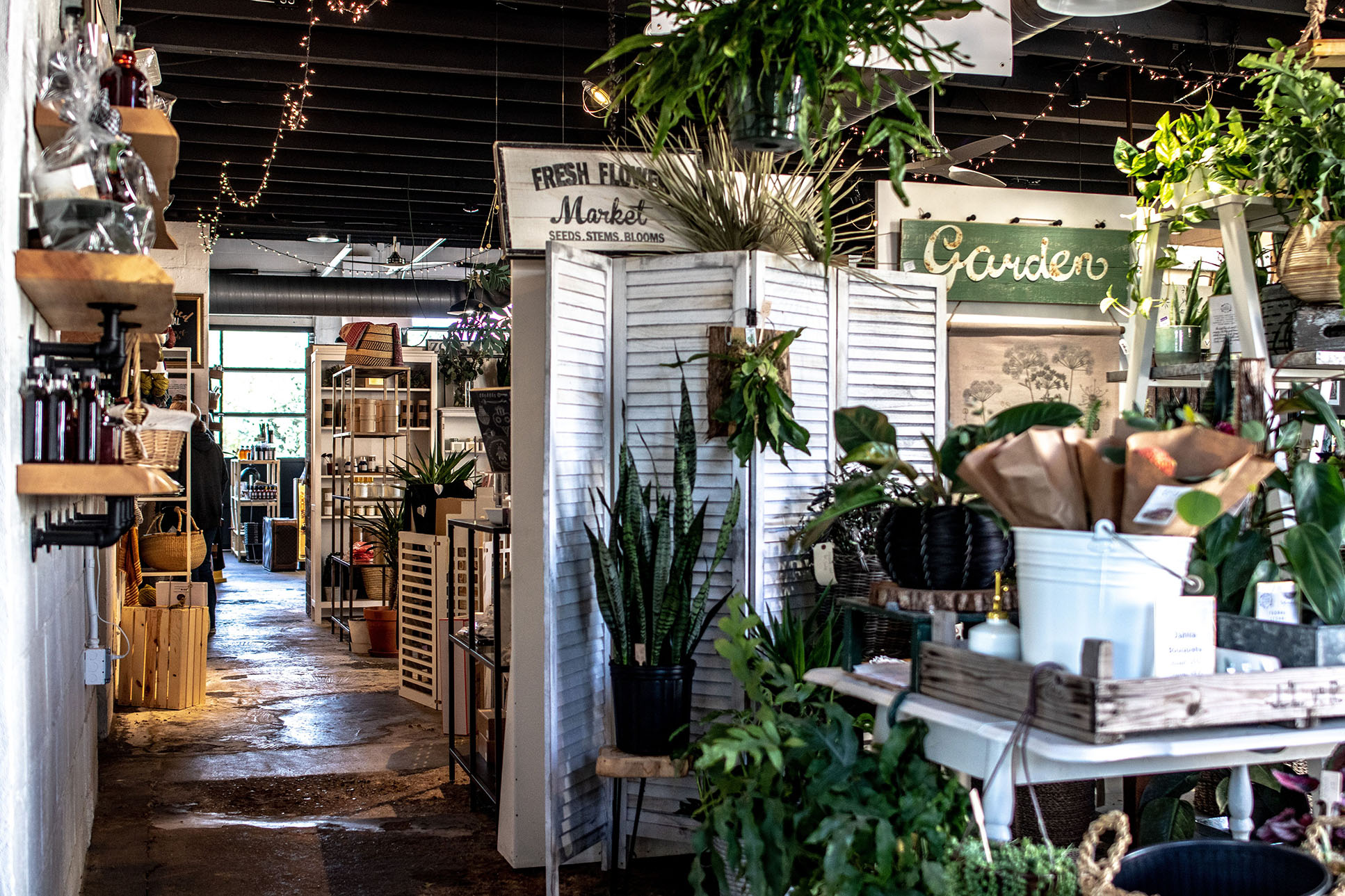 worKS Kennett Square brings 25 vendors of handcrafted and vintage goods,
along with plants and flowers from the Farm at Oxford, under one roof.

A Great Vibe in this Alternate District

When Tara moved from her State Street location she couldn’t have imagined the kind of creative synergy that would develop as The Creamery metamorphosed into a stunning example of community-focused adaptive reuse and as Braeloch Brewing revitalized and repurposed their building. “They’re both gorgeous,” she says, “and I’m happy to be their neighbors.” The new Birch Street streetscape and the extended and connected trails will further enhance the aesthetic of the neighborhood. “I love our view of the green space and the Creamery and our proximity to the trail—and even the railroad tracks,” Tara says.

“The new map, highlighting the different neighborhoods of Kennett Square, says it all—this alternate district here on Birch and South Walnut isn’t a detraction from other areas of town but an addition. There’s this great symbiotic relationship and these wonderful partnerships,” Tara says. A bright, beautiful Pop-Up Lending Library (PULL station) at the corner of the parking lot, between worKS and the railroad tracks, is a fun and fitting symbol of this kind of collaboration. The PULL stations throughout Kennett Square are all built by local organizations, through partnerships with the nonprofit AHHAH and the Kennett Library, and painted by local artists. But the worKS PULL station is hyperlocal—artist Daniel Chow lives about 100 yards away. 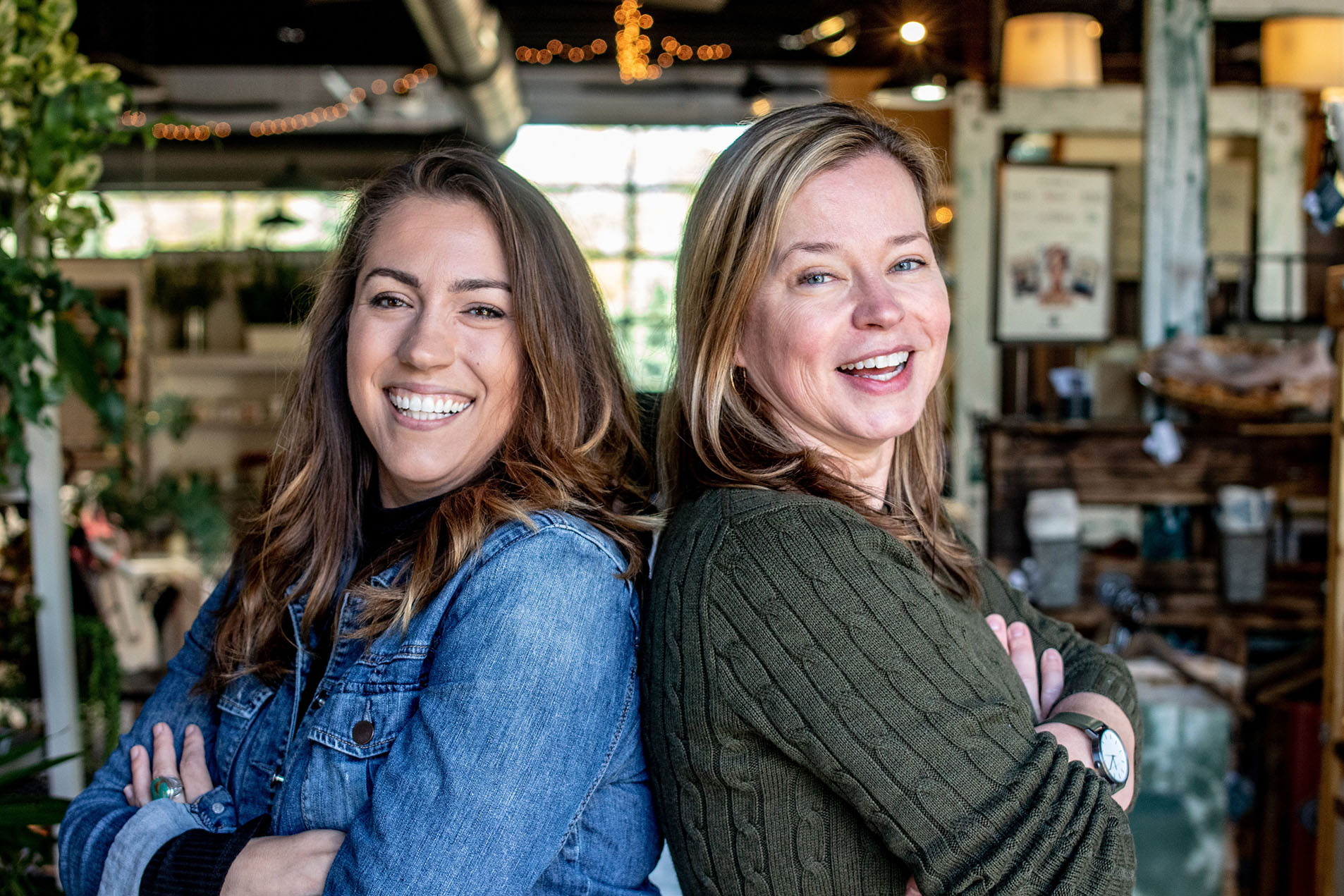 Tara loves being in a neighborhood full of people who are excited to be in this place where new growth is happening. “It’s interesting to see people embrace the concept of adaptive reuse. I love the aesthetic, and it makes sense economically to reimagine and reconfigure existing resources. It’s a shot in the arm for community pride and economic development. There’s a certain vibe here—it’s hard to define, but I know it when I see it.” 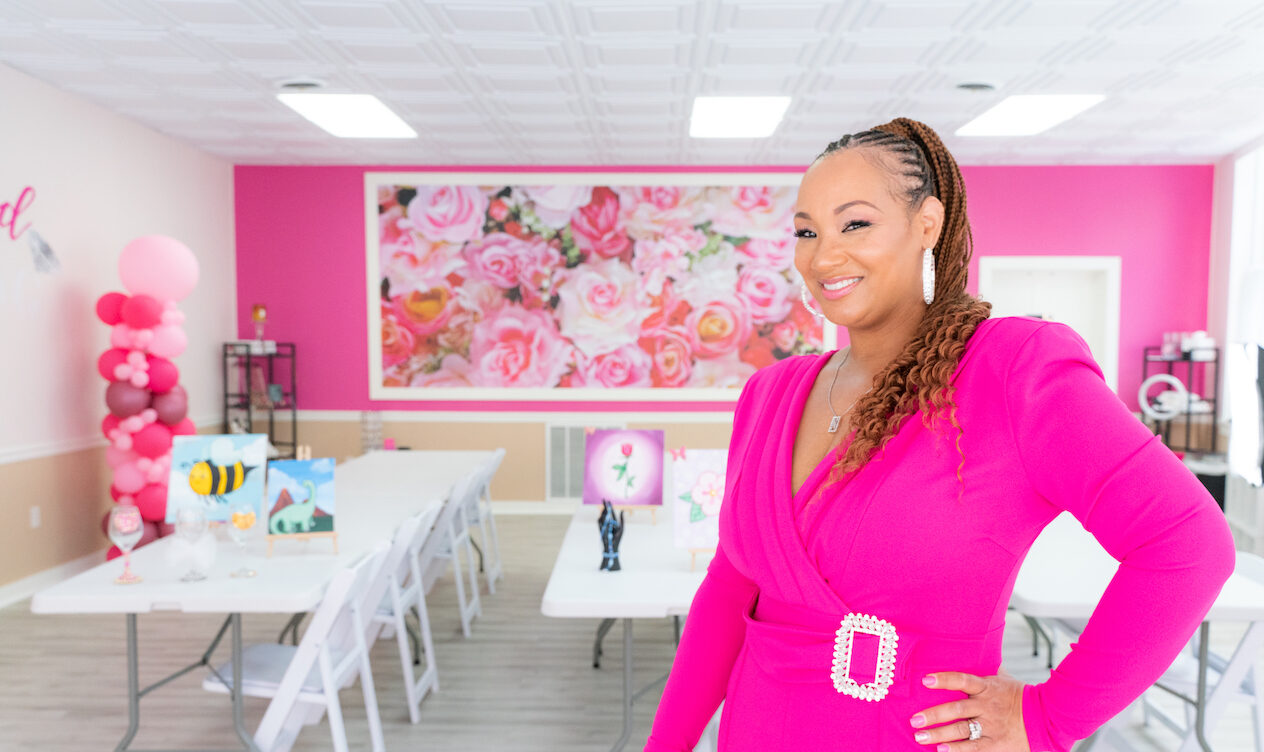 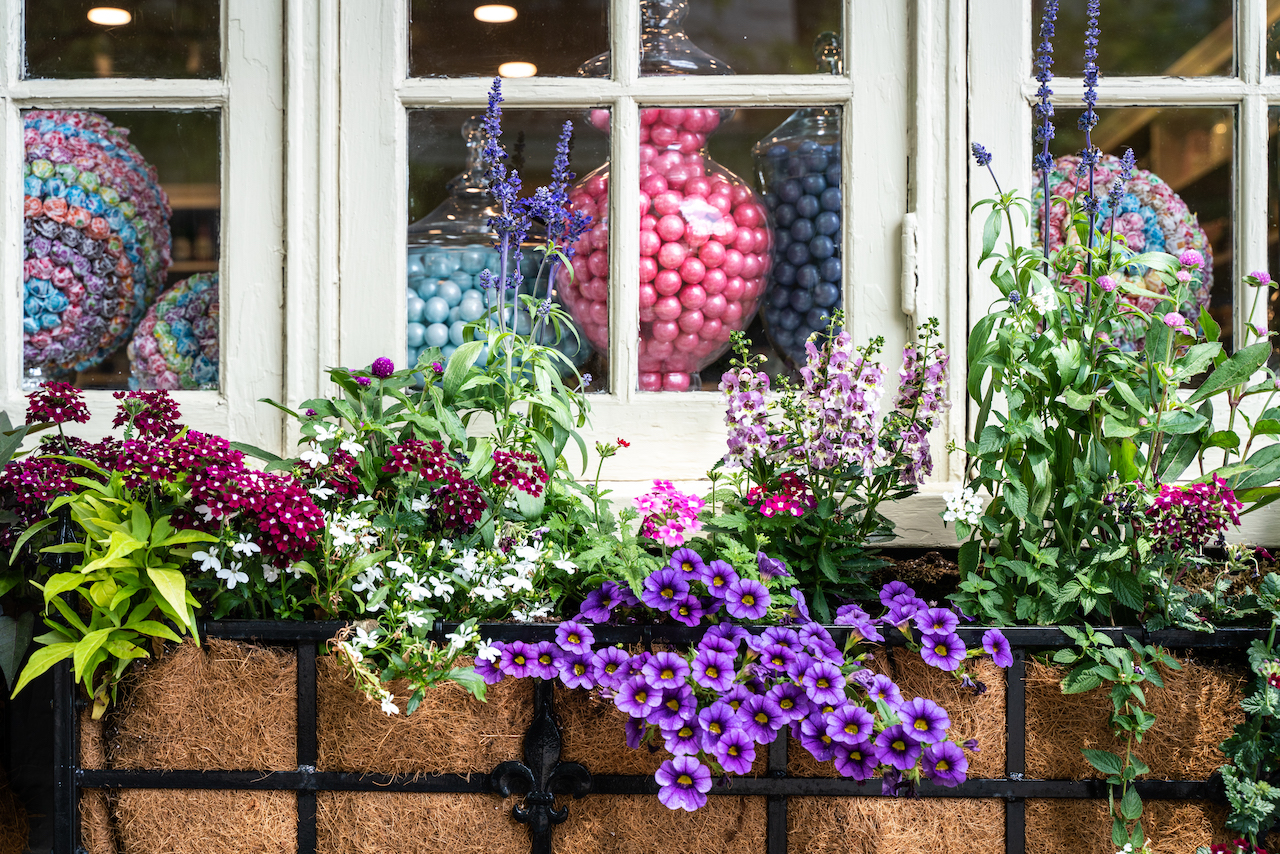 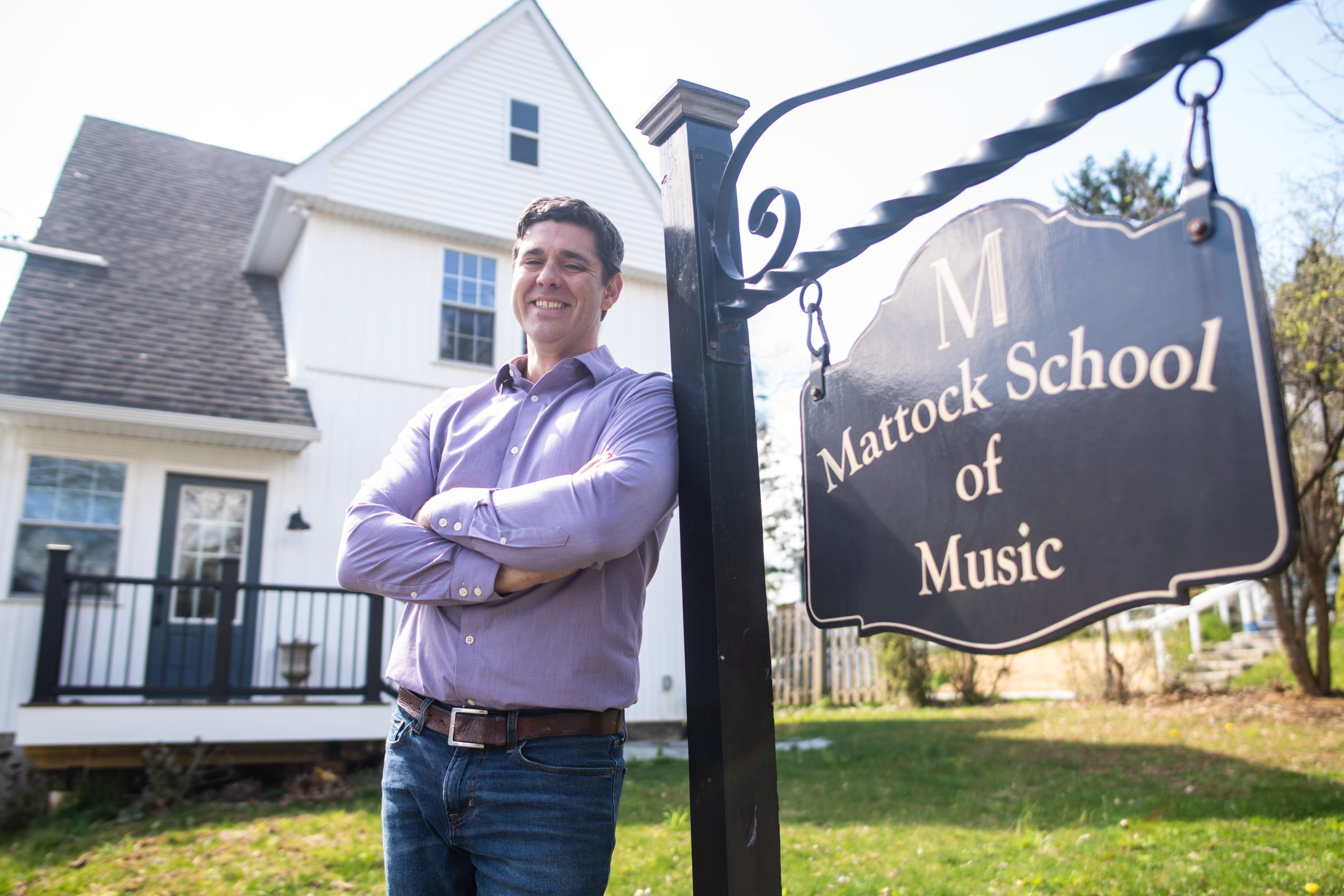